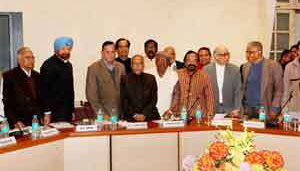 for all Centrally- sponsored schemes to ensure their proper implementation.

In their pre-Budget interaction with Mr Mukherjee at North Block today, the representatives of various social sector groups stressed the need for speeding up financial inclusion along with financial literacy and more consumer protection measures.

It was also suggested that the wages under Mahatma Gandhi National Rural Employment Guarantee Scheme (MGNREGS) be hiked. They also felt that the national minimum wage should be rational enough to give the poor their dues.

“There are too many impediments to competition in our policies, laws and regulations governing a wide range of subjects administered by central ministries and State governments. These need to be removed so that economic forces are allowed to function without hiccups and hurdles,” Mr Pradeep S. Mehta, Secretary-General, CUTS International, an economic policy research and advocacy group, said after the meeting.

This news can also be viewed at:
http://www.thehindubusinessline.com/