The US Federal Trade Commission has shared details of its probe into alleged violation of competition practices by Google in the US with the Competition Commission of India.

The competition watchdog probing a complaint against Google has received some crucial inputs from its US counterpart that may help build a case against the internet giant, officials familiar with the development said.

The US Federal Trade Commission (FTC) has shared details of its probe into alleged violation of competition practices by Google in the US with the Competition Commission of India (CCI), which is looking into a complaint that the firm has been abusing its dominance in India’s online search and display advertising market. 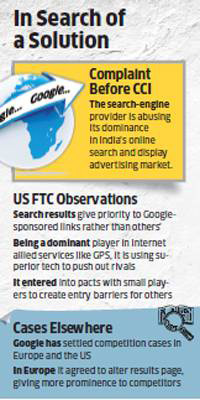 “India has sought help from the US FTC under the international cooperation pact,” an official privy to the matter told ET, confirming that some information had been received. Officials said the information could help CCI build its case against Google, launched after Consumers Unity and Trust Society (CUTS), an advocacy group, filed a complaint in 2012.
The US FTC, along with major competition regulators across the globe, has been investigating a case of abuse of dominance against Google, which shows that Google “search results” give priority to Google sponsored pages or links.
For example, if a Google search is done for Bill Gates, the first few results would show theGoogle Plus pages of Bill Gates rather than LinkedIn or Facebook pages of Gates. Facebook and Google Plus are rivals in the social networking space.
When contacted a Google spokesperson said, “We continue to cooperate with the Competition Commission of India and are responding to all their queries.”

The person also pointed out that the US FTC’s intensive 18-month investigation had concluded last year “with no finding of fault against Google”. Indian officials, however, said that although the US settled competition case against Google without charges last year, it was observed that the company abused its dominance in the GPS tracking market.

The US FTC has told the Indian competition watchdog that Google is using its superior technology to push out competitors from the GPS tracking market. It also said Google has entered into contracts with small players to create entry barriers for other players.

This information could prove vital for the Indian investigation, a senior official said. While the director general of the CCI had investigated the matter in 2012 and has submitted his report to the commission, sources said the DG’s office staff lacked the skill set to investigate the matter.

If proved guilty of misusing its market domination, Google could be slapped with a penalty.

The European competition regulator too was investigating a similar case of abuse of dominance. There, Google has offered to settle the matter. India, unlike most other jurisdictions, does not have a settlement clause in its Competition Act.