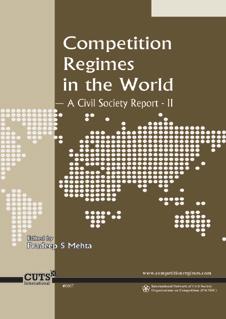 CUTS started a self-supported project to prepare a report entitled “Competition Regimes Around the World – A Civil Society Report” Vol-I published in the year 2005-2006, which was an attempt to map out competition regimes around the world and covered 119 countries. By reading the book, one can know about 150 years of evolution of competition law, along with its different aspects of legislation and implementation. The book helps in categorising competition authorities worldwide on the basis of the different types of institutional structures they follow. The publication was primarily based on the voluntary contributions of various International Network of Civil Society Organisations on Competition (INCSOC) members and other experts and practitioners. INCSOC was floated by several civil society organisations in 2003, in the aftermath of CUTS’ pioneering project namely ‘7Up1’, so as to promote a healthy competition culture around the world..At present, CUTS is in the process of updating all the country chapters based on the changes that have taken place over the years in the countries’ competition regime and intends to produce the Vol-II of the mentioned report. Further, the plan is to also include new countries to the almanac and thus, the target is to cover around 148 countries.The country papers in the compilation provide a glimpse of the competition scenario in the selected countries in a simple language. It serves as an almanac, resource material as well as the launching pad for taking up more analytical work in future. The report also helps the readers to understand where a particular country stands vis-a-vis other countries in terms of development of competition scenario. Thus, it is useful for all groups of stakeholders including policy-makers, regulators, civil society members, academia and business representatives.