Welcome to our site

CUTS International is undertaking a Cost Benefit Analysis study on Rajasthan Shops and Commercial Establishments Act 1958. The study is principally aimed at informing the State Government of Rajasthan about the costs and benefits of policy provisions on different stakeholders, and nudging the Government to introduce amendments in Rajasthan Shops and Commercial Establishments Act, 1958 based on the study findings.

The study holds significance in the light of a strong push by Central Government to states for introducing policy reforms, in order to facilitate Ease of Doing Business (EoDB). The Centre introduced the Model Shops and Establishments (Regulation of Employment and Conditions of Service) Bill, 2016 (Model Bill) laying down the guidelines for States to adopt and accordingly amend their respective State legislations regulating shops and establishments. Taking a cue from the central government, several states are taking initiatives to reform their respective shops and commercial establishment legislations. Such legislative changes impact different stakeholders in direct and indirect manner, including owners of shops and commercial establishments/ businesses, employees, consumers, government, economy of the state, among others. The impact on stakeholders can be positive (benefits) as well as negative (costs).

Consequently, it is necessary to conduct an assessment of costs and benefits of the existing provisions of the Act, on different stakeholder groups, particularly, government, establishments and employees. Based on its expertise and experience, CUTS International intends to carry out such an exercise with support from the Government of Rajasthan.

Presentation for LWO on CBA of Raj S& CE 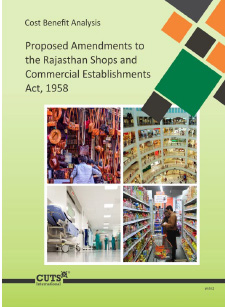 Proposed Amendments to the Rajasthan Shops and Commercial Establishments Act, 1958