A series of interactions were held with the rural families and farmers in Dhanodara, Vadavali, Ranasan and Jiliyawasna villages by a renowned NGO, ANaRDe Foundation (recipient of award from Late Raiben Nathalal Gandhi and Kilachand Devchand Foundation) as a part of demand side management and renewable energy project initiated by VIKSAT, Ahmedabad. The meetings were presided by Mr. Ankur Baruah, Project Coordinator, VIKSAT, Ashokbhai, ANaRDe, Shambhu bhai, District Coordinator, ANaRDe, G.J Vyas, J.D Patel, Geeta Patel, Pannaben Patel, Sarpanch of the respective villages and participated by the villagers.

Shri Shambhai urged upon the need to be aware about the importance of saving energy, about alternative sources of energy and RET promotion, gobar gas plant in particular. Discussions were held on impacts of global warming on the environment, irregularities in seasons, increase in drought periods, increase in summer temperatures, increase in CO2 in the atmosphere and similar other effects. How production of energy, burning of coal and other fossil fuels, act as polluting agents, how electricity rates are determined and similar topics were discussed.

This news item can also be viewed in Gujarati: 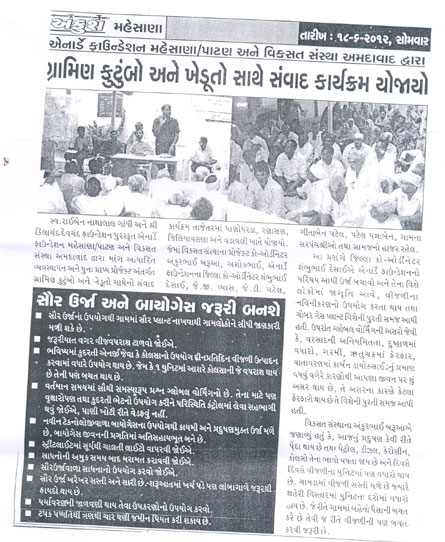