CUTS is implementing a two-year project ‘Capacity Building on Competition Policy in Select Countries of Eastern and Southern Africa’ codenamed 7Up3 Project in seven countries: Botswana, Ethiopia, Malawi, Mauritius, Mozambique, Namibia and Uganda, with support from the Norwegian Agency for Development Cooperation (NORAD), Norway and the Department for International Development (DFID), United Kingdom.

One of the main aim of the 7Up3 project is to develop the capacity of national stakeholders including the policy makers, regulators, civil society organisations, academicians and the media in each of the project countries through a participatory process to understand and appreciate prevailing competition concerns from the national, regional and international perspectives, and enable them to respond appropriately.

To meet this end, a leading research institution in each of the project countries will be involved in intensive research to evaluate the competition concerns facing the project countries, including their regional dimensions and implications. The research findings would subsequently be disseminated nationally (and in the region) through a network developed by the help of local civil society organisations, adopting appropriate means. 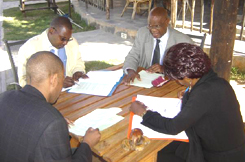 The national markets in eastern and southern Africa are integrating through three regional bodies, viz., COMESA, SADC and EAC with considerable geographical overlap. Though some countries of the region have framed competition legislations, there has been little or no progress when it comes to implementation of the legislation. Therefore, the need for developing the capacity of the stakeholders of the countries in the region was felt, especially in the wake of the privatisation and globalisation climate prevailing there.

The 7Up3 project is a sequel to the 7Up1 Project, implemented earlier by CUTS in seven developing countries of the Commonwealth in India, Kenya, Pakistan, South Africa, Sri Lanka, Tanzania and Zambia; and the 7Up2 Project currently being implemented by CUTS C-CIER in Bangladesh, Cambodia, India, Lao PDR, Nepal and Vietnam.