Consumer Unity & Trust Society (CUTS) has been working on issues relating to the Cable TV industry for quite some time. This resulted in its nomination to the Conditional Access System (CAS) Implementation Committee constituted by the Ministry of Information & Broadcasting, Government of India.

In 2003, results of an all India survey done by CUTS on cable TV industry were published. The survey was done to gauge level of consumer awareness on cable television in the country. The study highlighted the following issues:

With this background, CUTS undertook a second survey on Cable TV in India, which comprises of research and field surveys in the four metros where CAS was to be implemented. The survey was done by CUTS in Delhi and Kolkata, Citizen Consumer and Civic Action Group (CAG) in Chennai, and Consumer Guidance Society of India (CGSI) in Mumbai. The project received funding under the consumer welfare fund of the Ministry of Consumer Affairs, Food & Public Distribution, Government of India.

Initially the survey aimed at assessing consumer’s perception on the operational efficiency of CAS and to assess whether CAS has helped to remove or at least reduce the inefficiencies and inequities faced in the past. However, since CAS has remained a non-starter, except in Chennai and parts of Delhi, the survey was done in four metros to:

The main findings are:

Cable Television Networks (Regulation) Amendment Bill, 2002 has now become an Act. Before the Bill was passed, CUTS, conducted an all India survey to find out primary consumer concerns in the country vis-à-vis cable TV industry and its services.
The objectives of this survey were:

Following is an analysis of these questionnaires:
No. of channels provided by Cable Operators:

No. of channels viewed:

Thus, only a handful of channels are viewed by most of the consumers as against the total number of channels broadcasted. Favourite channels differ region-wise but are mostly same in a particular region and amount to merely 2-3 channels per family on an average.

Awareness about Set-top Boxes: An amazing figure of 70% were unaware of the concept of set-top boxes, while 27% were aware.

The survey was conducted in four metropolitan cities of India: Delhi, Kolkata, Mumbai and Chennai during March-May, 2004. The survey was conducted by sending questionnaire to randomly selected households. This was complemented by personally interviewing some of the respondents. A total of 1506 persons were surveyed, of which: 282 were from Delhi, 392 from Kolkata, 434 from Mumbai, and 398 from Chennai.

Size of the Family (Table 2)

Table 2. Size of the Family

Table 3. Respondents by No. of TV Sets Owned

Cable T.V. Scenario in the Four Metros
No. of channels received (Table 4)

No. of channels watched (Table 5)

A similar trend is observed across all metros (Table 7)

Table 8. Respondents by Awareness of disputes between cable operators

There is some variation across metros with respect to choice available with consumers in terms of changing their cable operator:

Thus, Delhi and Kolkata are at the two extremes in terms of consumers’ ability to change cable operators.

Table 10. Monthly Subscription Charge by No. of TV Sets Owned 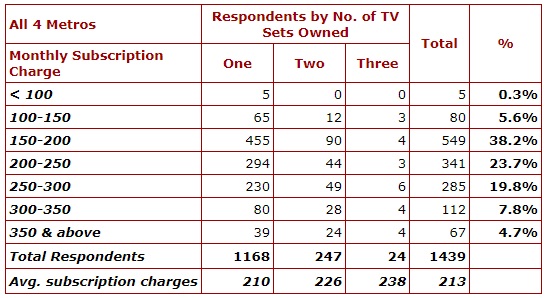 In case of the four metros (Table 11)

Table 13. Respondents by Frequency of hike in Monthly Subscription

Is inability to change cable operator accompanied by a frequent hike in cable subscription rates (Table 14)?

This clearly indicates the need for regulating prices, especially when there is a monopoly of cable operator at the local level.
Improvements in the present cable TV system

Conditional Access System (CAS)
Most respondents (96%) had heard of CAS, which is evident across all metros(Table 15)

Table 15 Respondents by Knowledge of CAS

However, majority of respondents in all four metros (63%) are not in favour of accepting CAS (Table 16). Key reasons cited for not accepting CAS are

However, in Mumbai, majority of consumers (61%) are in favour of accepting CAS and the main reasons advanced are:

Given that most respondents have knowledge of CAS and majority of them are not in favour of accepting CAS, we attempt to find out:

Table 18. Percentage of Respondents who give Post-CAS Monthly Rent as Reason for not accepting CAS

Since majority of respondents in Mumbai are willing to accept CAS, the figure represents % of respondents with knowledge of CAS, who favour CAS and give post-CAS expected fall in monthly subscription as reason for accepting CAS
What monthly bill would you prefer, if CAS is implemented (Table 19)

If advertisements were banned, how much more would you pay (Table 20)