Among several issues which will be raised by invitees, we wish to draw the attention of the Finance Minister on just three critical issues here, which inter alia require to be flagged in the Budget Speech to exhibit the resolve of the Government: 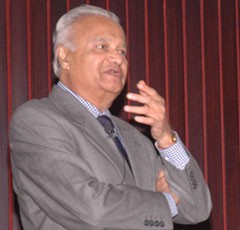 The Ministry of Corporate Affairs has drafted and circulated a National Competition Policy among central ministries and state governments after several consultations with stakeholders. The policy is designed to address and reduce impediments to competition in our policies, laws and regulations across the board. The Ministry proposes to bring this issue to the Cabinet and adopt the same after due process in the FE, 2012-13.

In our opinion, and articulation by the Corporate Affairs Minister, the Policy can unleash the 2nd wave of economic reforms in India and add to growth hugely.

The Policy has been proposed on the successful experience from Australia which had introduced it in 1995 and achieved 5.5 percent economic growth. Australia, also being a federal country, had to incentivise States to adopt reforms, as we have done in the case of VAT and also proposed in the GST. We also need to adopt a suitable financial incentive scheme to do so in India.

In fact, competition reforms can lead to jump in revenues and hence the Union Government has to share the same with the States through incentive schemes. In some cases the States can also benefit directly by such measures when introducing reforms. Annexed please find a case study from Rajasthan, when competition reforms were adopted in the State Excise Policy. The system of liquor vends was democratised in 2005-06 by allotting shops to single owners through a lottery system as against the earlier system of auctioning liquor marketing on a district wise basis to contractors.

Action desired: Strong support from the Finance Minister for adoption of the National Competition Policy so that all central ministries and States adopt competition reforms.

India has the unique distinction of being the worst country in the world in terms of the road safety scenario. Our deaths due to road accidents is over 1.3 lakhs per annum and the estimated cost is over Rs. 1,00,000 lakh crores or nearly 2.00 percent of our GDP.

The WHO has forecast that this will become the fifth largest killer by 2030. The UN has also adopted the decade of 2011-20 as the Decade of Action on Road Safety.

We do not even have a Road Safety Policy, while the issue straddles between the Ministry of Road Transport & Highways and the Ministry of Health & Family Welfare, thus we end up in situations that the left hand does not know what the right hand is doing.

The MORTH has also drafted a bill: National Road Safety and Traffic Management Act, but the same was sent back to the Ministry by the concerned Parliamentary Standing Committee because of certain infirmities. The same needs to be expedited and the National Road Safety Board be established without loss of further time.

After the financial crisis in the west, one issue which has been flagged at the G-20 meetings by the global consumer movement is the need to enhance and strengthen financial consumer protection measures.

Each year the global economy creates an estimated 150 million new consumers of financial services. Most are in developing countries, where consumer protection and financial literacy are still in their infancy.

Financial inclusion is key to financial consumer protection. However out of 1.21 billion Indians, only about 40 percent citizens still have access to formal banking services. Only 38 per cent (32,000 branches) of the bank branches are in the rural areas.

Violation of data privacy; hidden or inflated charges or fees; unfair contract terms and conditions (including unfair variation of contract terms, interest rates or charges); undisclosed level of financial risk passed to the consumer; contract terms not explained clearly at point of sale; after-sale customer service falling below expectations; aggressive or invasive sales techniques; breach of contract by the service provider; failure to deliver the service; exclusion from service etc. are some of the common problems still faced by consumers of financial services in India as anywhere in the world.

To highlight one particular aspect, is the short changing of workers who are remitting their earnings from abroad. In total, money transfers from workers overseas contributed USD55 billion to the Indian economy in 2010. To put it into perspective, that’s over twenty five times the amount of foreign aid or constituted around 5.00 percent of the national income. However migrant workers have to pay charges of 10 to 20 percent on each of these transfers, with the result that for every INR100 sent home their family may receive only INR 80 or 90. For instance Indian workers in Canada pay an average of 10.54% when sending money home.

There is an urgent need of a strong consumer protection mechanism, setting clear rules for financial institutions regarding their dealings with retail customers and to ensure that consumers receive information to allow them to make informed decisions, are not subject to unfair or misleading practices and have access to redressal mechanisms to resolve disputes.

This news can also be viewed at: