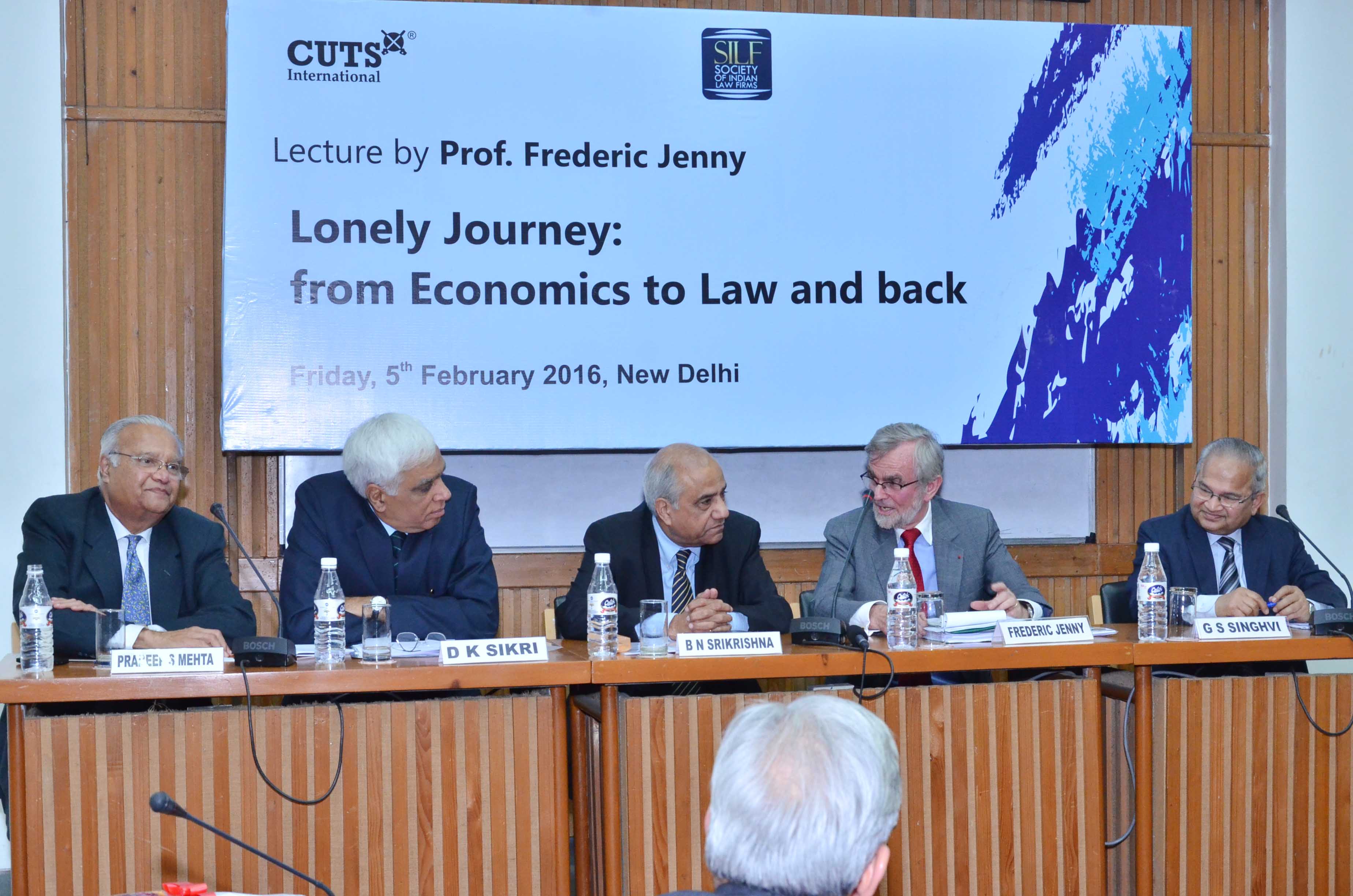 There is an imminent need of judges well versed in economics to man the judicial system in India said Justice B.N. Srikrishna, Former Judge, Supreme Court of India. He gave the opening remarks at a lecture organised by CUTS International and Society of Indian Law Firms (SILF) titled Lonely Journey: from Economics to Law and Back.

The lecture was delivered by Frederic Jenny, a professor of economics and international competition law expert having served eight years as a judge on the French Supreme Court (Cour de cassation). Jenny is also Chairman, OECD’s Committee on Competition among other such positions. Presentation by Prof. Jenny can be accessed at: http://goo.gl/z3FmJ5

Pradeep S Mehta, Secretary General, CUTS International welcomed the dignitaries and underlined the role of economics in competition law and economic regulation. He emphasised that capacity building is required to fill the void in Indian legal and judicial system. “Now that we will have exclusive courts to deal with commercial disputes, it is an imperative to impart training on micro economics to judges who will be manning these courts”.

He further underlined the capacity building efforts of CUTS Institute for Regulation & Competition in this interface amongst other efforts in the field of economics, competition law and regulation.

In his lecture, Jenny gave interesting instances and cases while sharing his personal experience of being first ever economist judge in the French Supreme Court. He deliberated upon the apparent conflict, the divergence in approaches and the perspectives of economists and judges.

Justice G. S. Singhvi, Chairman, Competition Appellate Tribunal (COMPAT) commented that the judicial system is averse to having economists. He further added that Indian judiciary is new to competition law and till now about 15 competition law cases have reached the Supreme Court. He shared his concerns about lack of staff and infrastructure at the COMPAT.

Shri D. K. Sikri, the new Chairman of Competition Commission of India (CCI) said that legal and economic side need to intertwine for best outcomes. He added that application of economics is very relevant to competition law and internally we are trying to build the capacity and a suitable ecosystem for this. He emphasised the critical role of the DG investigation and commented that the DG is also required to make more use of economic analysis.

While focusing on the competition law, Mr Mehta highlighted the increased role of regulatory state after liberalisation and noted that the role of economics is pivotal in the application of the regulatory laws in India.

As a result of deregulation, the development of competition law and trade liberalisation, there is an increasing number of economic issues being dealt with by the judiciary. Legal decisions need not only to be well founded from the legal perspective but also to be economically relevant. Yet in many countries judges are rarely trained in economic matters, just like many economists are not trained in legal matters.

Former Chairman of US FTC and Director of UK’s Competition & Markets Authority, Prof William Kovacic emphasised on training lawyers in the field of economics and developing interdisciplinary courses to fill this void. He noted that most lawyers and judges in the USA have developed a good understanding of economics and thus a critical mass has been built up over the last 40 years.

Justice Singhvi remarked that now a days our new law universities are teaching inter disciplinary courses to law students, thus over time we will have better lawyers with better understanding of economics etc.

The event witnessed the participation of senior academicians, legal professionals, research organisations, consumer organisations and other senior experts. Economic analysis of law can help in predicting what effect particular legal rules will have and deciding what legal rules should exist. There was interactive discussion towards the end and the panellists responded to interesting queries raised from the floor.

Below is related news: