By Shakti Sinha and Sarthak Shukla

If the recent turn of events in Delhi and Kathmandu are any indication, the India-Nepal relations are in for a turbulent ride ahead. However, no matter how grim the situation might seem, we believe that these two countries can enjoy considerable the mutual benefits from cross border energy trade. Additionally, there is a very strong economic case for developing a robust power trading ecosystem which can have far reaching environmental, institutional and social benefits on both sides of the border.

With this in mind, we explore the prospects of reliable power trading ecosystem for meeting the future development goals of both countries. This is premised on the idea of gradually re-establishing social and political trust that would result from efforts by each of the countries on the economic-front that would facilitate improved standards of living of people living on both the sides of the border. History has taught us that mutually beneficial economic trading has helped bridge social and political divide across borders. For instance, a CUTS research highlighted that setting up of India-Bangladesh “Border-Haats” in Meghalaya and Tripura has reduced local unemployment, curbed cross-border illegal activities and women trafficking and has fuelled border area development.

India’s annual per capita power consumption stood at approximately 1181 kilowatt hour (kWh) for the year 2018, while that of Nepal was 134 kWh. This highlights the wide scope of intensifying power usage by the population of Nepal, which could strongly fuel l positive economic results. Additionally, when compared with Bhutan’s per capita consumption of 2779 kWh, there is a stark contrast between two countries similarly endowed with hydropower potential.

An insightful picture emerges if the the energy scenario of Nepal is explored through a few trends. For instance, in the income statement of the bundled Nepal Electricity Authority, there is an inflection point in its profit/loss in the year 2016-17. As depicted in Table 1 and Graph 1, this transition for NEA into becoming a profit making body from a continuously loss-making one in 2017 is on account of gains in foreign exchange earnings,reduction in interest expenses and a jump in sales revenue. 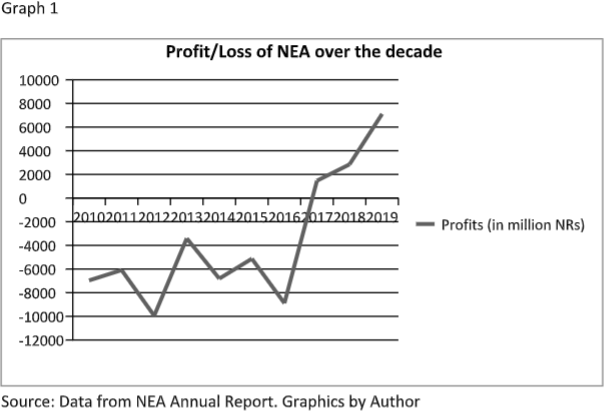 Another crucial trend is the increased share of energy imports from India in meeting Nepal’s peak demand over the years. This is clear from graph 2 which highlights how imported energy from India has surpassed the share of NEA generation as well as power purchased from domestic Independent Power Producers (IPP) in Nepal. 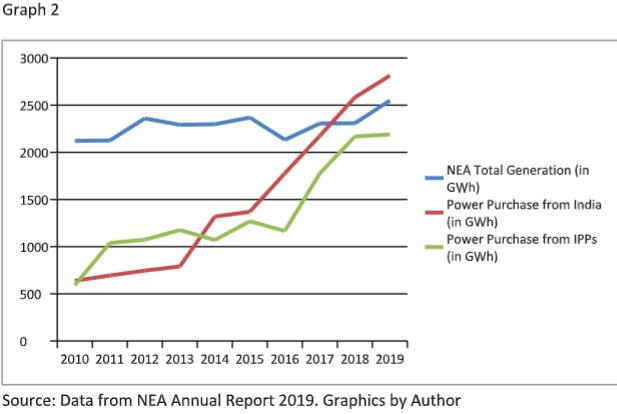 With growing dependence on India, another key aspect to note here is the saturation in state generation by the NEA. This state of affairs is because Nepal has only exploited less than 3% of its vast hydropower potential of around 43 GW. It is not clear if Nepal took a conscious call of not over-exploiting the hydro resources.

Another development that the NEA extolls is the remarkable feat of reducing system losses to 15.32%, which is close to the 15% mark that India is targeting for its AT&C losses.

During the financial year 2019, Nepal imported around 2813 Million Units of power from India while it exported close to 35 Million Units to the power deficit state of Bihar in India. For the year 2018-19, power imported from India provided close to 43% of Nepal’s peak demand over the months.

These speak for themselves. There is a lot of scope to build synergies for power trading between India and Nepal, which got a major push by the 2014 agreement on Power Trading between India and Nepal. Currently, the 400kV D/C transmission line from Mujaffarpur in Bihar to Dhabelkar in Nepal, operated at 220kV voltage level, is the key point of interconnection for bulk supply of power. Additional transmission lines in the pipeline include 400kV line between New Bhutwal and Gorakhpur, 400kV line between New Duhabi and Purnia & Lumki and Bareilly.

Developments in power trading ecosystem in India and Nepal are taking place at a fast pace with NVVN of India and NEA signing an agreement on Day Ahead Market. This could further get a boost with the introduction of Real-Time Markets by the power exchanges in India. However, disagreements over Nepal’s efforts to trade power with Bangladesh and China (feasibility study was conducted for a 400kV line from Ratamate in Nepal to Kerung in China) have pitted the issue of politics overruling sound economics in the context of India-Nepal relations.

In order to overcome this complicated relationship between India and Nepal, what is required is more than just trading of actual electricity across the border line, but also sharing cross-learnings and good practices. This can serve the dual purpose of developing the power-trading arrangements while at the same time ensuring that the political cholesterol of mistrust is tackled through sound economic principles.

There can be multiple parameters on which discussions and dialogues could prove to be beneficial for both the countries. This could include learnings between hydro-dominated states of Uttarakhand and Himachal Pradesh in India and Nepal on managing the power supply and demand issues. For instance, given that Nepal is on its way to significantly reduce its system losses, it can benefit hugely from the paradox of low loss yet high ACS-ARR (Average Cost of Supply-Annual Revenue Requirement) gap in the twin hill-states in India. Uttarakhand, the state with 19% AT&C losses has only Rs 0.28 gap between cost of supply and revenue requirement, while for Himachal Pradesh, these figures stand of 5.67% (AT&C losses) and Rs 1.42 (ACS-ARR gap). Additionally, as the Uttarakhand tragedy of 2013 was partly ascribed to its irrational development of hydropower projects, it could be a good study case for Nepal’s hydro project ambitions.

This could help Nepal significantly in designing its tariff and revenue structures in a way that with higher capacity addition and electrification, loss reductions do not entail financial unviability of its power sector. Additionally, Nepal can learn from India’s interventions on alternatives forms of renewable energy, particularly wind and solar, maybe through trading mechanisms or even off-grid installations across the region.

Furthermore, what India can proactively learn and adapt from Nepal’s power sector are the principles of planning and governance that they have institutionalised. This implies assessing the feasibility of having Nepal-like departments/institutions within the state’s governing structures including System’s Planning Department, Economic Analysis Department, Environmental and Social Studies Department and Power Purchase Agreement Implementation and Monitoring Department, to name a few. Additionally, both the countries can share and learn from each other’s experience of electrification of households in their respective countries. While Nepal’s electrification rate has remarkably grown from 53% in 2010 to now 93% in 2019, India is on the verge of achieving 100% household electrification with 18374 households remaining as of 31st March 2019.

Such dialogues and knowledge exchanges would not only foster the power-trading relationship between India and Nepal but could also prove to be a Brahmastra for rebuilding the socio-economic fabric and subsequently political trust between these two nations.