The seventh edition of Spotlight looks at Implications of Global Energy Transition on World Geopolitics and opportunities for Asia.

The Inseparable Interrelation between Energy and Geopolitics

Oil and natural gas undeniably, have had an important role in shaping economies, bringing prosperity to countries. However, it has not been without downsides. Hydrocarbons have also contributed to carbon emissions and ambient air pollution in cities. Moreover, oil and gas have also commanded a considerable impact on global geopolitics. Countries have forged alliances and waged wars against each other, with changing demand-supply equation and impatience to achieve energy security. Following the COP 21 agreement in Paris, a major energy transition has picked pace with countries shifting to renewables in response to climate change. With oil and gas controlling global geopolitics for almost a century, such transition may substantially impact the current dynamics. 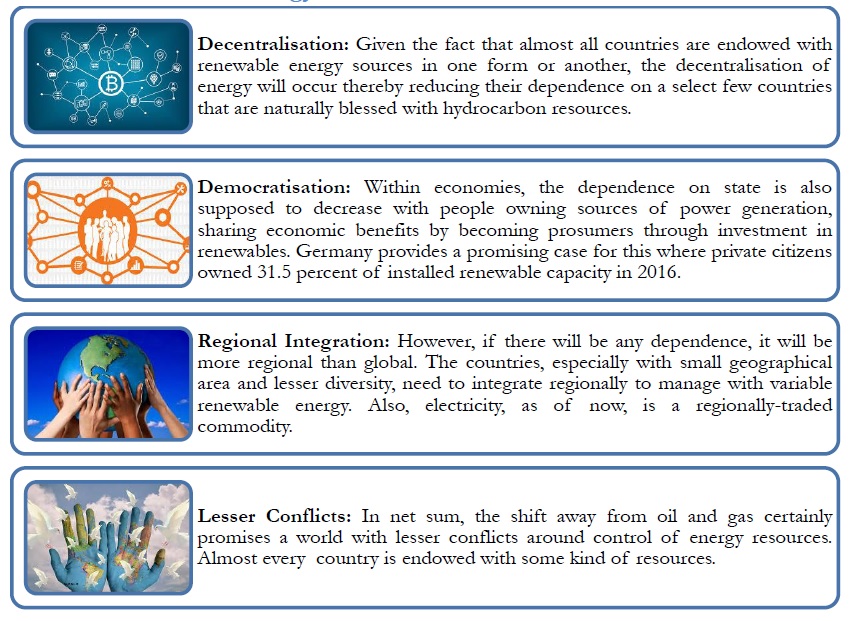 Opportunity for Asia: Could Global Transition and its evolution be a precursor to shift of pivot of energy governance to Asia from the Middle East and North America?

The transition presents an incredible opportunity for Asia, commanding 60 percent of the population spread across energy-guzzling economies. With the saturation of energy demand in Organisation for Economic Cooperation and Development (OECD) countries, Asia has emerged as the largest demand centre for hydrocarbons with China and India alone consuming 20 percent of oil, which will only grow in the future.

Additionally, these two countries have also been running one of the most ambitious plans in renewables. For instance, India has now set a target of installing electricity generation capacity through renewables worth 500 GW by 2030. On the other hand, China already has one-fourth of global capacity. Subsequent investment, with a major proportion already in the pipeline and existing control on technology, will only improve Asia’s position in Renewable space. However, to achieve fruitful outcomes, greater regional integration and effective functioning of organisations, such as Association of Southeast Asian Nations (ASEAN), Bay of Bengal Initiative for Multi-Sectoral Technical and Economic Cooperation (BIMSTEC), and Brazil, Russia, India, China, and South Africa (BRICS) will be necessary.

Some Take Away Thoughts?