The ninth edition of the spotlight evaluates the utilization of funds collected by District Mineral Foundations across major mining states in India.

A Story of Underutilisation and Negligence

In 2018, India ranked at 129th position out of 189 countries on the Human Development Index. India secured this position despite its huge efforts towards poverty alleviation mission. As per the 2019 Human Development Report, India’s HDI in 2018 improved marginally from 2017. However, the HDI, when discounted for inequality witnessed a loss of 26.3 percent due to inequity in the distribution of the HDI dimension indices.

According to a reply under the Right to Information query filed by The Indian Express in 2019, the Central Government funds allocated for few prominent social welfare schemes in 2019 remain underutilised, failing to achieve even the target of 75 percent expenditure. This underutilisation of funds not only hinders the access of people to a decent standard of living but also adds to the poor performance of India on development indicators.

With approximately 70 percent of the funds collected by District Mineral Foundations (DMF) lying unutilised, the adequate utilisation of DMF funds can potentially act as an enabler in improving the level of human development indicators, especially in the most backward regions of India.

What is District Mineral Foundation?

District Mineral Foundation is a non-profit statutory trust instituted in every mining-affected district under the Mines and Minerals (Development and Regulation) Amendment Act (MMDR) 2015, with the precise objective ‘to work for the interest and benefit of persons, and areas affected by mining-related operations’. Till now, DMF rules have been framed in 21 states and DMFs have been set up in 557 out of a total of 583 mining districts.

DMF is a district-level planning and implementing agency of the project/programme instituted for the interest & benefit of persons, and areas affected by mining-related operations to promote inclusive development.

How is DMF Funded?

Every DMF is funded by statutory contributions from those holders (company/individual miners) of mining lease which carries out mining activity in the respective district. The contributions are made in the proportion of their royalty payments to the state governments in the following manner: 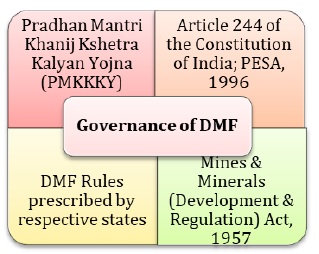 The objectives of Pradhan Mantri Khanij Kshetra Kalyan Yojana (PMKKKY) in mining-affected areas and its prescription on the utilisation of DMF funds are as follows: 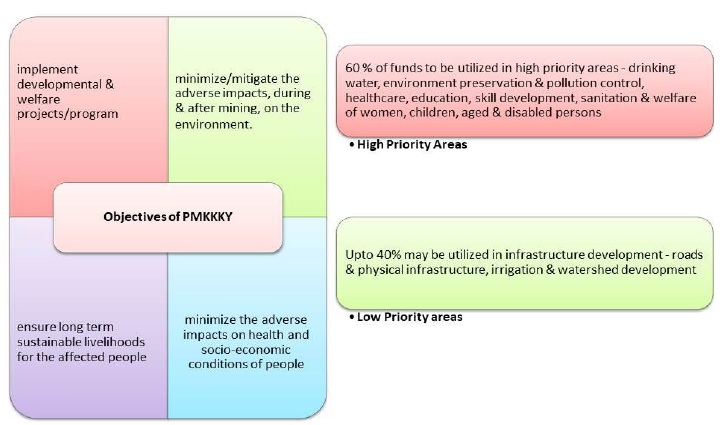 As shown in the depicted figure, there is a significant underutilisation of the DMF funds at the national level and in prominent mining states. This includes Chattishgarh, Odisha, and Jharkhand which comprises of 66.3 percent of total approved funds. Comparably, in Chattisgarh, the utilisation percentage of the funds is better, which is shown in the figure below:

In the high-priority areas mandated by the PMKKKY, the utilisation of sanctioned funds is highly varied and simultaneously sub-optimal. This is represented in the following figure: