In his remarks on the release of the CUTS report on the status of consumer protection and competition in the MENA countries at Geneva on 10th July, Hassan Qaqaya, head of the UNCTAD Competition Law and Consumer Policy Branch said that the study is a wonderful initiative and the work undertaken by CUTS is extremely useful. 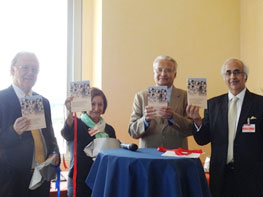 He urged CUTS to continue the impressive work, because Cartels and other form of anti-competitive practices are here to stay and that there is no vaccine developed so far to tackle such practices.

For nearly three decades, CUTS has been advocating for competitive markets in developing countries by empowering national stakeholders to demand appropriate reforms in that direction.

As a consumer organisation, CUTS interest on competition issues stems from the understanding that competition reforms is an imminent element for promoting consumer welfare through lower prices and better availability of good quality goods and services.

CUTS has worked on competition policy and law projects in a number of regions, viz. eastern, southern and western Africa; south and southeast Asia. One region that CUTS has not been able to cover yet is Middle East and Northern Africa region (commonly referred to as the MENA region). Given this, CUTS undertook a scoping mission in select MENA countries (Algeria, Egypt, Jordan, Lebanon, Morocco, Syria and Tunisia) with support of the Arab Network for Environment and Development (RAED), Egypt.

In his introductory remarks, CUTS Secretary General, Pradeep S Mehta provided a brief overview of the mission and mentioned that the key purpose of the mission was to understand the prevailing state of the competition policy & law (CPL) and consumer protection regimes in select MENA countries & highlight key issues for action.

Mehta went on to emphasise that the CUTS MENA scoping mission report sheds new and valuable light on a vital area of national economic policy in the MENA region that has henceforth received far too little attention. An interesting point shared with the audience in terms of policy related distortions, was the existence of an Exclusive Agency Act in Lebanon, which permits engagement of one sole agency for public procurement, completely thwarting competition.

Ms. Mona Yassine, in her remarks, emphasised on the importance of civil society organisations in promoting economic reforms. There is an urgent need for the civil society to play a greater role on socio-economic policy matters than before. This was a realisation of having started an NGO focussed on competition issues in Egypt and she acknowledged that there is a great deal one can learn from experience of CUTS.

Mr. Ashok Chawla acknowledged the credible research undertaken by CUTS in the area of economic policy issues. “CUTS is a rare organisation which advocates on issues based upon their research work”, said Chawla. “Their academic work is very good”.

Towards the end, Mr. Philippe Brusick acknowledged his long term association with CUTS and emphasised on the importance of involvement of CSOs in furthering competition reforms in developing countries.