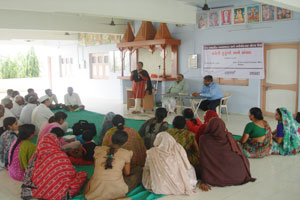 May – July 2012
CUTS with the support of Shakti Sustainable Energy Foundation (SSEF), India has implemented an initiative, ‘Demand Side Management and Renewable Energy in India: Capacity building of CSOs’ over two years (2011-2012) in two states of India (Gujarat and West Bengal) to better prepare CSOs to carry out need-based advocacy to demand for Renewable Energy (RE) and Demand Side Management (DSM) and participate in the associated policy and regulatory processes.

Twenty Consumer Interface Meetings (CIMs) were organised in respective project state, i.e. Gujarat and West Bengal. The purpose of the CIMs was to reach out to different category of consumers at the state level and make them aware of the role that they need to play in advocating for implementation of RE and EE. Efforts were made to register the problems being faced by consumers and possible solutions were provided to them. Representatives of relevant consumer groups (those who participated in the state level training workshops, conducted earlier) were invited as one of the resource persons for the CIMs.

A training manual booklet in FAQ format was developed for the participants to disseminate information on RE & EE technologies, pay back period, long term benefits, etc. It was used as a resource material during the CIMs. Also, on the basis of findings from the baseline consumer survey, few key issues were identified which were analysed and documented in form of four stakeholder specific case studies (Small and Medium Enterprises/Agriculture/Commercial/Household). The training manual and case studies were translated into local vernacular language by both partners for their states and were disseminated during the CIMs.

As an outcome of the CIMs, the project was able to map challenges and constraints being faced by relevant group of stakeholders for adopting RE/EE having a better understanding of the ground realities, would help the project team in effectively engaging with the policy makers, during the policy advocacy meetings. Further, the project partners also utilised the opportunity to map out initiatives/interventions made by different category of consumer groups with regard to RE/EE.