CUTS Centre for Competition, Investment & Economic Regulation (CUTS CCIER) is implementing a two-year project ‘Strengthening Constituencies for Effective Competition Regimes in Select West African Countries’ (also referred to as 7Up4 Project) with the support of the Department for International Development (DFID), UK; the International Development Research Centre (IDRC), Canada and the Ministry of Foreign Affairs, Sweden would be implemented over a period of twenty four months (2 years) in seven countries in the region, viz. – Burkina Faso, The Gambia, Ghana, Mali, Nigeria, Senegal and Togo. 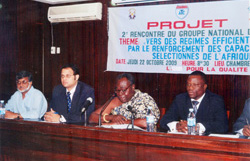 Through the 7Up4 project, CUTS aims to raise the profile of competition at the national (project countries) and the regional levels in West Africa. The project would highlight the relevance and need for an effective competition regime for economic development and poverty reduction in select West African countries/region, and therefore set in motion the process of evolution and implementation of competition regimes, and enable them to respond appropriately.
To meet this end, a leading research institution in each of the project countries will be involved in intensive research to evaluate the competition concerns facing the project countries, including their regional dimensions and implications. The research findings would subsequently be disseminated nationally (and in the region) through a network developed by the help of local civil society organisations, adopting appropriate means.

The 7Up4 project is a sequel to the 7Up1 Project, implemented earlier by CUTS in seven developing countries of the Commonwealth in India, Kenya, Pakistan, South Africa, Sri Lanka, Tanzania and Zambia; the 7Up2 Project implemented by CUTS C-CIER in Bangladesh, Cambodia, India, Lao PDR, Nepal and Vietnam and 7Up3 project implemented by CUTS C-CIER in seven countries in the region of Eastern and Southern Africa viz. Botswana, Ethiopia, Malawi, Mauritius, Mozambique, Namibia and Uganda.