CREW project to add impetus for competition reforms in Ghana

Findings from the CUTS and ISSER project entitled, “Competition Reforms in Key Markets for Enhancing Social & Economic Welfare in Developing Countries” or the CREW project as it is referred to, would be critical for the Ghanaian government’s pursuit for developing a national competition regime. The project findings will strengthen the evidence base and create additional pressure for Ghana to adopt a national competition policy and law without further delay.

This was pointed out by Mr Kofi Amenyah, Director (Legal Affairs), Ministry of Trade and Industry (MoTI) in his address during a meeting of national stakeholders held at the Institute of Statistical, Social and Economic Research (ISSER) of the University of Ghana, Accra on July 25th. Mr Amenyah, who was the chief guest during the event, added that identifying competition obstacles and the benefits from a sound competition reforms process would facilitate adoption of a competition policy and law. 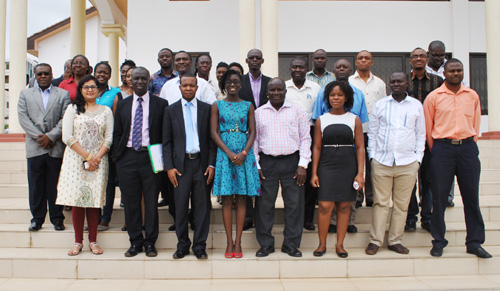 The meeting was conducted to discuss the research findings from the two sectors (bus transport and maize sector) with key stakeholders from Ghana. The CREW project is being implemented across four countries (Ghana, India, The Philippines and Zambia) with support from DFID, UK and BMZ, Germany (facilitated by GIZ, Germany). ISSER is the research partner of CUTS in Ghana and spearheading the research phase of the project. CUTS Accra is the local coordinator of this project in the country.

The critical role of competition policy and reforms in increasing welfare for consumers and producers was underlined by Professor Samuel Kofi Date-Bah, the Chairman of CUTS Accra Board. He gave a brief overview of the project and highlighted its main objective as to generate empirical evidence that competition can indeed lead to welfare benefits for consumers and producers.

The research in the maize sector revealed that a majority of the maize farmers are credit constrained as the interest rates are high while credit availability has been low. Most of the farmers are also not fully aware of the activities of the National Food Buffer Stock Company (NAFCO), including its price setting mechanism as they mostly sell produce to the middlemen (village assemblers, etc.) and realise whatever price is offered to them. The distribution of subsidized fertiliser was also an issue – as access to subsidised fertiliser (and in time) continued to remain a challenge. Enhanced private participation has led to some improvement in the availability of fertilisers in Ghana. This is an element that the recently introduced fertiliser regulatory regime needs to bear in mind. From the consumers’ point, although there have been some improvements in the availability of maize, the quality has not improved while the price has continued to rise over time.

In the transport sector, it was found out that the privatisation of the vehicle inspection service has helped a lot as it has reduced the cost as well as the time for processing and renewing the vehicle licenses. There was no good route allocation system in place to regulate intra-city services, which also justifies the need for a national road transport regulator to instil order (through the development and the implementation of a harmonised regulatory framework in the country), and ensure that the intended benefits accrue to consumers and/or producers. While the Drivers and Vehicle Licensing Authority (DVLA) is in the process of addressing most of the policy gaps identified, there is still more to be done to ensure that data availability is improved, to ease planning. The National Road Safety Commission (NRSC) is also working to ensure that operational standards are enforced at the bus terminuses rather than on the road, so that they are more effective and have lasting effects on commuters.

There was active participation from the NRG members, with the discussion identifying some issues that needed more attention in the research, and certain areas for the project to focus in Ghana. CUTS and ISSER would incorporate these comments for improving the baseline and also the subsequent advocacy and outreach.

Some of the institutions that were represented at this meeting included the Ministry of Food and Agriculture, Ministry of Roads and Transport, Ministry of Trade and Industry, Business Sector Advocacy Challenge (BUSAC) Fund, Ghana Chamber of Commerce and Industry, Association of Ghana Industries (AGI), Forum for Agriculturals Research for Africa (FARA), Peasant Farmers Association, Margins Group, Africa Centre for Economic Transformation (ACET) and National Road Safety Commission (NRSC).

Prof Felix Asante, Director (ISSER) expressed his and the institution (ISSER’s) delight in being part of this extremely interesting and relevant project in Ghana, and was happy to continue working together with CUTS on this critical area of economic policy, given the current environment in the country.