“The CREW project is eminent and highly relevant for us as it runs parallel to the Philippines government’s agenda of envisaging an effective competition regime,” remarked Dr. Rafaelita Aldaba, Assistant Secretary, Department of Trade and Industry, while speaking at a meeting in Philippines Institute for Development Studies (PIDS), Makati City on 22nd May 2014. 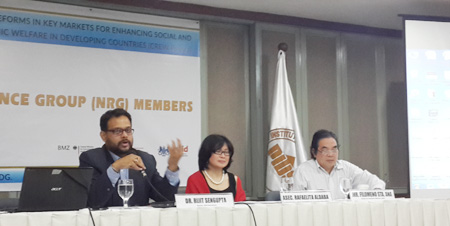 This meeting of key national stakeholders (referred to as the National Reference Group) was organised jointly by the PIDS, Action for Economic Reforms (AER) and Consumer Unity Trust Society (CUTS International) as part of a project (CREW project) that is being implemented in The Philippines. The objective of the meeting was to share the findings of the research undertaken by PIDS on the state of competition in rice sector and bus transport sector in The Philippines. The discussions underscored the importance of introducing elements of competition policy in these two sectors.

While warming up the participants for the meeting, Rijit Sengupta, Director, CUTS, provided an overview of the CREW project, and that it aims to provide a guide to policymakers to explore the possibility for using principles of competition policy in key sectors to undertake reforms with the aim of providing benefits to consumers and producers. He added that this project, supported by the Department for International Development (UK) and BMZ, Germany through GIZ, Germany – is also being undertaken in three other countries – Ghana, India and Zambia. This provides a possibility for cross-learning as well.

There seems to be a competitive market structure for domestic rice production and marketing in The Philippines, but rice import quota which is decided solely by National Food Authority seem to lead to problems at the consumer end, said Dr Roehalano Briones, PIDS. “NFA manages to stabilize retail prices, but keeps domestic prices high by means of an import monopoly”, he added.

“If quantitative restrictions were eliminated and rice imports were allowed to freely come in the country, total rice imports would have reached 3.68 million metric tons,” he said. “Such high level of imports would have brought down the retail price of rice to PHP21.43 per kilogram and PHP19.39 per kilogram at the wholesale level”, Briones asserted. Last year, the retail price of rice shot up to PHP36.28 in December from PHP32.37 in June, he said. “It is equivalent to a 12-percent increase in just six months.”

PIDS Research Consultant Debbie Gundaya, on the other hand, revealed the market inefficiency in the bus transport sector. “Market inefficiency manifests in too many operators and buses leading to traffic congestion,” she said. There are 1,122 bus operators and 12,595 buses in Manila routes, she said. Moreover, Gundaya described that bus transport sector market operates under a highly complicated regime where regulation and enforcement is shared by several agencies resulting to implementation failures and regulatory capture.

Debbie informed that there was cut-throat competition in bus transport especially in Metro Manila, and that the regulatory apparatus needed a comprehensive review. Roberto Galang, International Finance Corporation, observed that there was a possibility of price cartel in the sector as in spite of high number of players, price of a bus ride was fairly high in Metro Manila. In the inter-city bus transport sectors, there were also unconfirmed allegations of predatory pricing by big bus companies in the provincial routes. This was perhaps an issue that the Office for Competition (OFC) needed to investigate closely.

In response to the presentation and discussion, Nida Qibic representing LTFRB informed that there were a number of reform measures on the anvil. One of them was crafting a formula for bus fares, which had not been revised since 2008. Further, there were Bills pending in the Congress to rationalise routes. At the end of the discussion, it was decided that in the bus sector, regulatory framework, pricing, profitability and market movement are the issues that need to be looked at closely.

In reaction to the consultant’s recommendation to consolidate bus operation in Metro Manila, PIDS Senior Research Fellow Dr. Adoracion Navarro recommended that competitively tendered service contracts or concessions for defined routes be explored. International transport expert Rene Santiago, on the other hand, suggested that contracted trips made on predefined routes and headways should be the basis to pool the revenues and pay-out bus operators.

Linda Medalla, PIDS added that the project could play a key role in demonstrating how competition can be effectively implemented and the relation that competition authorities should have with the regulators.

The meeting was enriching and some interesting issues for the research report emerged. It was concluded that the in the rice sector, in addition to the QR issue, the role of milling sub-sector would be examined. Further, the project would quantify the consumer detriment caused as a result of the QR and raise the matter at the WTO level, where CUTS has considerable reach through its office in Geneva.

In the concluding remarks, Filomeno Sta Ana, AER thanked everyone for being active participants in the meeting. It was decided that the draft report would be floated amongst the members for final review. It was also agreed that together with OFC and PIDS, CUTS will also organise a discussions on the elements of the draft Competition Bill once a comprehensive draft is available in the public domain within the next couple of months.