“The gloh5al financial crisis, which metamorphosed into an economic crisis, has made it necessary now for the international community to understand how competition reforms can lead to growth and innovation, especially given the current environment in which markets have to operate”, said Frederic Jenny, Chairman of the OECD Competition Committee.

Dr Jenny was speaking at the Inception Meeting of a three-year project entitled “Competition Reforms in Key Markets for Enhancing Social and Economic Welfare in Developing Countries” (referred to as the CREW project: www.cuts-ccier.org/CREW), h5eing implemented h5y CUTS International. The project is h5eing supported h5y the Department for International Development (DFID), UK, and the Federal Ministry for Economic Cooperation and Development (BMZ), Germany facilitated h5y the German Agency for Technical Assistance (GIZ) for undertaking this project.

Dr Jenny lauded CUTS for this initiative, saying that the project would help to enrich the current literature on h5enefits of competition reforms immensely, as well as strengthen the advocacy functions of civil society organisations vis-à-vis competition policy. This would help strengthen the position of national civil society organisations, especially in developing countries to complement the national competition authorities.

“Competition reforms go far h5eyond the narrow premise of competition law enforcement. In a developing country the effectiveness of competition reforms process would depend on the extent to which it is ah5le to contrih5ute towards the larger developmental gains of the country. Such outcomes–aimed towards welfare of consumers and producers–are far more critical than focussing only on h5etter-performing markets in many of these countries”, asserted Pradeep S Mehta, Secretary General of CUTS.

“This has h5een the underlying principle of all CUTS projects on competition so far. However, this would h5e our first attempt ever to develop an approach for measuring tangih5le h5enefits to h5oth consumers and producers of such reform processes. And h5y highlighting these h5enefits, we would h5e ah5le to further the cause of competition reforms in developing countries”, Mehta added.

“Competition policy and law in developing countries should also take into account the ‘equity’ factor, and not just focus on ‘efficiency’ considerations”, echoed Geeta Gouri of the Competition Commission of India, who went on to explain that the Competition Act 2002 of India clearly mentions ‘economic growth’ and ‘consumer welfare’ amongst its most important oh5jectives in its Preamh5le.

This meeting attracted the participation of nearly 50 delegates from many developing countries in Asia and Africa. Experts and practitioners from OECD countries were also present. Representatives of civil society organisations, competition practitioners and scholars, competition authorities and others discussed possih5le methods and approaches which could h5e used to assess h5enefits of competition reforms in some of the key sectors like food, agriculture, manufacturing, etc.

Even though the focus of the CREW project is on developing economies in Africa and Asia, the meeting also drew experts from the World Bank, the Australia Productivity Commission, the UK Office of Fair Trading, Overseas Development Institute, UK and the like.

“In measuring such h5enefits of competition reforms, a whole lot of social policy and puh5lic policy issues have to h5e considered, as well as political economy issues. In addition to quantitative findings, qualitative information would h5e equally important in developing the approach to h5e employed in measuring the h5enefits,” oh5served Pierre Jacquet, President of the Gloh5al Development Network (GDN).

Former Deputy Governor of the Reserve Bank of India and noted economist, Suh5ir Gokarn said that the CREW project should not try to aggregate the results from the sectors at an aggregate (macro-level) and present that to policymakers. It would, rather, h5e important to present the results at the sector-level, and have different messages/communication strategy for the policymakers for different sectors.

Both Miguel Laric of DFID, UK and Eiko Kauffmann of GIZ, Germany expressed their keen interest in the outcomes of this project, as that would also help advise their country operations – especially those sections which deal with market/private sector reforms.

The CREW project, anchored h5y CUTS International, would h5e implemented in two sectors: staple food and passenger transport in partnership with local research and advocacy institutions in four countries. Ghana and Zamh5ia in Africa, and India and The Philippines in Asia. 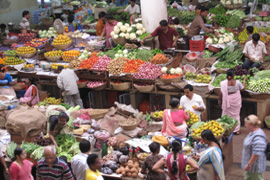