Making a case for competition reforms – promising but challenging

A number of experts and practitioners turned up for the second National Reference Group (NRG) meeting held under the aegis of CREW project, on 2nd July in New Delhi, India. CUTS is implementing the CREW project across four countries with support from the Department for International Development (DFID), UK and the German Ministry of Economic Cooperation (BMZ, Germany) facilitated by GIZ, Germany. Ghana, Zambia and The Philippines are the three other project countries, apart from India. 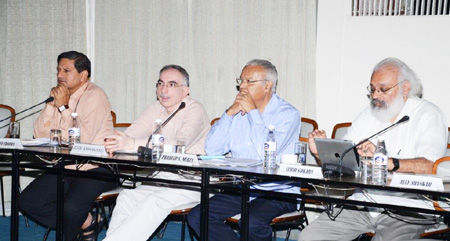 While welcoming members to the meeting, Pradeep Mehta, Secretary General, CUTS International, reiterated that the
main objective of the CREW project is to develop a body of evidence to engage in advocacy for promoting competition reforms in two key sectors, staple food and bus transport, across the four project countries. This meeting was aimed at sharing the results of the research undertaken in the two sectors in India during the Phase I (Diagnostic Phase) and to receive comments from the NRG members.

Subir Gokarn, Director of Research, Brookings India, and an Adviser to the CREW project observed that there are three elements of the project that make it promising yet challenging:

He stated that he CREW project has been designed such that it covers the above points. He was keen to see how CUTS and its partners would imbibe the same in designing an approach to advocate for competition reforms in developing countries.

The market being investigated under the CREW Project for staple food sector in India is ‘Wheat’ and the states being looked at are Bihar and Rajasthan. These states were chosen for the contrasting state specific reforms and market structures. For instance, in Rajasthan, the Agriculture Produce Market Committee (APMC), Act reforms were undertaken in the year 2005, whereas, in Bihar, it was repealed in 2006.

Broadly, the research found that inefficiency in procurement and payment by the state procurement entities is forcing farmers to sell their produce to traders, often at cost below the Minimum Support Price (MSP). State governments of both the states, seem to have failed to find ways to encourage private procurement. . In Rajasthan, while wheat procurement was being done by the 130-odd APMCs, only numbered private players, like ITC Limited, were active. In Bihar, on the other hand, procurement was being done by two public entities – Bihar State Food Corporation (BSFC) and the Primary Agriculture Credit Societies (PACS).

The case of PACS was found to be contentious. They have considerable political influence and some of them seem to be working in concert with traders. Therefore, in spite of having designed a decentralised procurement system in the state – benefits don’t seem to be accruing to the small and marginal farmers who dominate the farming community in Bihar. Sanjeev Chopra, Joint Secretary, Ministry of Agriculture suggested to undertake a critical review of PACS in.

Private participation has also remained a challenge in the warehousing segment in both the states. This segment is also dominated by the public sector and is plagued with concerns relating to the quality of the storage facilities, etc. The Warehouse Regulation and Development Act, which is in the process of being implemented, should provide scope not only for improved private participation but also for monitoring their capacity to maintain quality of stock.

Seed is one segment in the Wheat sector in Bihar where private participation was encouraged as part of the Agriculture Roadmap developed by the Government in the year 2006. This segment is dominated by private seed providers characterised by a formidable network and innovative promotional activities. This has resulted in good quality seeds being available to farmers at low cost. Also, it has provided a knee-jerk effect on the incumbent (Bihar Rajya Beej Nigam) which has resorted to innovative programmes like Chief Ministers Seed Crash Programme and Integrated Seed Village Scheme to promote development of wheat seeds by farmers.

On the issue of anti-competitive practices in the wheat sector, Ashok Vishandass from CACP asserted that ‘bonus’ over and above MSP often acts as a ‘competition distortionary’ measure. It attracts farmers from neighbouring states to sell to state offering such ‘bonus’ through traders and splitting the margins. This not only promotes market malpractices but also creates unwanted (additional) revenue stress on the state that announced such bonus. Ajay Vir Jakhar representing Bharatiya Krishak Samaj was of the opinion that states are doing precious little to design policies that can help farmers. He added whatever productivity gains have resulted in wheat has been due to the current MSP regime of the government.

Provisions on Road Transport should be taken out of the Motor Vehicles Act (MV Act 1988) in India suggested sector experts and practitioners while commenting on the research findings in the bus transport sector. Chittaranjan Dass, Secretary General, All India Confederation of Goods Vehicle Owners’ Association (ACOGOA) asserted that there is a need for India to have a dedicated Public Transport Policy. He was responding to Ajay Shankar, Member Secretary, National Manufacturing Competitiveness Council (NMCC) question on what changes are needed in sectoral policy and how to make them work on the ground.

High operating costs and corruption were cited as the reasons for abolishing the MPSRTC in the year2005. Bus transport in the state is provided only by private players, but the regulatory apparatus for overseeing these providers’ activities is weak. The situation in Gujarat is the opposite, where most of busy inter-city routes are captured by the GSRTC.

Interestingly, the experts highlighted that the leasing being done to the private operators by AMTS for stage carriage stands illegal, as the MV Act has no provision of private participation for such operations. The MV Act is in a dire need of review, which has been pending for the last four years.

It was unanimously felt that the CREW project could make a strong case and advocate for fast-tracking the process of review by the new Government. Of special interest would be the Chapter dealing with operationalisation of the State Road Transport Corporations (SRTCs). As it stands, provisions of the MV Act does not seem to facilitate private participation in the sector, given that most States look at provision of bus services as a social obligation and not as a gainful economic activity.

As a result, in spite of losses being incurred by SRTCs, they have continued to operate with state support. In some states like Gujarat, as the CREW research revealed – the state government has also licensed private operators to operate as stage carriages on inter-state routes as they fulfil the consumer demand of comfort and efficiency. But sector experts like Prof. Siva Sriraman indicated that there were no provisions in the Motor Vehicles Act that provided the legal backing for allowing private operators to function like this.

Scholars TCA Srinivas Raghavan and Partha Mukhopadhyay suggested that it’s opportune to explore possibilities of developing multi-modal transport systems especially in metros and large cities in India. CUTS and Indicus were advised to study the successful cases that existed and to derive lessons from them.

In closing, Anil Bhardwaj, Director of the Ministry of Corporate Affairs welcomed the findings of the CREW project. He added that developing a standardised guide for promoting competition reforms in sectors would need to be aligned with the prevailing environment in the sector. Member of the Competition Commission of India (CCI), Augustine Peter suggested that a thorough review of literature should be undertaken for both the project sectors.. He assured CUTS of help and cooperation from the Commission as always and felt that the findings from the research would be looked at closely by CCI.