The maize and bus transport sectors are critical sectors which remain high on the Zambia Government’s policy reforms agenda and enhancing understanding of the benefits of effectively implementing competition reforms in them would forge better policy options and choices for stronger economic performance of the country. 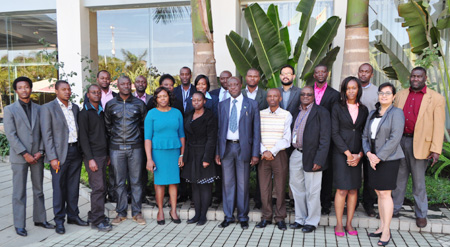 This was emphasised by Siazongo Siakalenge, Permanent Secretary, Ministry of Commerce, Trade and Industry (MCTI), Government of Zambia. He was inaugurating the second meeting of the National Reference Group (NRG) of the CREW project in Zambia held at Golden Bridge, Lusaka on the 27th of June 2014.

He added that demonstrating benefits of competition to stakeholders using a credible body of evidence has remained a challenge for developing country policymakers. The MCTI was happy to know that the project would lead to the development of such evidence and look forward to the same.

Mr Siakalenge assured that MCTI would be happy to work with CUTS in liaising with the relevant Ministries of Agriculture and of Transport for exploring the incorporation of emerging recommendations from the project in relevant policies and processes.

This meeting was part of the ongoing project, ‘Competition Reforms in Key Markets for Enhancing Social and Economic Welfare in Developing Countries’ referred to as the CREW Project (www.cuts-ccier.org/crew), being implemented in Ghana, India, The Philippines and Zambia by CUTS International.

The project, which is now in its second year, is being implemented by CUTS International, with development partnership of DFID, UK and BMZ Germany (facilitated by GIZ, Germany). In Zambia, the project is being implemented with technical assistance from the Zambia Institute of Policy and Research (ZIPAR) and the local CUTS centre.

In his introductory remarks, Rijit Sengupta, Regional Director (Africa) for CUTS International, and coordinator of the CREW project pointed out that the NRG comprised key national institutions and stakeholders with the specifc role of taking the project findings forward for policy and practice changes.

The purpose of this second NRG meeting was therefore to allow the sector experts to share the findings from the project to enable the NRG members to review them and guide the researchers on issues that need to be explored further. Thus two presentations, one on bus transport sector and the other on the maize sector, were made during the meeting.

The Director, Mergers and Monopolies of the Competition and Consumer Protection Commission (CCPC), Luyamba Mpamba highlighted that the two sectors being targeted under the project are also among the most viable and open to entry, which has seen CCPC intervening in them following some allegations of anticompetitive practices.

Thus, the CCPC is also happy that such a project is implemented in Zambia as this would help in identifying reforms that can remove impediments that are stifling competition, leading to adverse impact in the market.

In the Maize sector, the activities of the Food Reserve Agency (FRA) in regulating wholesale price of maize seem to have increased the market price in some areas, however, benefitting only the ‘net sellers’ of maize, which comprise less than a third of the maize growersin the country.

Further, in most areas where fertiliser was being supplied through the Fertiliser Input Support Programme (FISP), this has resulted in crowding out of private fertiliser providers. Access to fertilisers continues to remain a challenge for producers – and some sort of an arrangement (partnership) between the public and private sectors would help improve timely availability of fertilisers to maize growers.

One of the key emerging findings in bus transport was low entry barriers in the bus transport sector, which seem to have encouraged private participation in the sector since it was liberalised.

While the country had well-laid out regulatory policies for regulating road traffic, little attempt seem to have been made to assess their actual implementation on the ground and the resulting benefits.

It was further felt that the regulator – Road Transport & Safety Agency (RTSA) needed to strengthen institutional cooperation with other relevant regulators like the Competition and Consumer Protection Commission (CCPC), Zambia Bureau of Standards (ZABS), etc.

The meeting was characterised by rich discussions on the project findings from the two sectors, which would go a long way in ensuring that the objectives of the study would be attained. The results of the primary survey were work in progress and the final results would be incorporated and shared in the draft report to NRG members for comments.

Among the institutions that were represented at the meeting, who are also members of the NRG. were Zambia Consumers Association (ZACA), the Food and Agriculture Organisation (FAO), the Commuters Rights Association of Zambia (CRAZ) and the Zambia Bureau of Standards (ZABS).